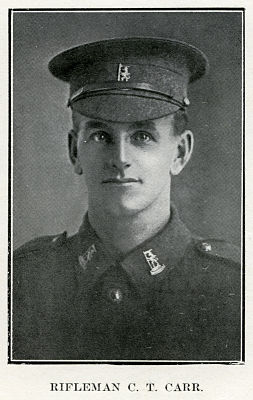 Charles’s younger brother, Norman MacLeod Carr (Service number 26792) (1894 – 1981) also served in and survived WW1. Charles attended Kaukapakapa School and then through a scholarship, went to Auckland Grammar School from 1902. On leaving school, he worked on a Waiuku farm as a ploughman and then on a farm at Masterton.

He enlisted on 16 October 1915 and after training, sailed on 8 January 1916 for Suez, Egypt as a Rifleman in the New Zealand Rifle Brigade in the 3rd Reinforcements, 2nd Battalion, F Company. He was 5ft 9 1/2 inches tall, with grey eyes and brown hair. He was sent to France to the Front at the Battle of the Somme. The Somme Offensive – from July 1 to November 18, 1916, was fought by the Allied troops of France and Britain against the Germans on the Western Front, the area where Northern France borders Belgium and West Germany. The New Zealand Division joined the British Expeditionary Force in the third phase of the battle 15 September 1916. New Zealand troops endured 23 days of unbroken fighting – the longest of any division on the Somme. The casualty figures were devastating – of the 15,000 New Zealanders who fought at the Somme in northern France, 6000 were wounded and 2000 killed. [2] Brigadier-General W. G. Braithwaite mentioned him in despatches on 17 July 1916 for his bravery at the Battle of the Somme:  For excellent services rendered during the past six weeks when on patrol duty at night in ‘no man’s land’.  Shortly after he was killed in action on 23 July 1916 whilst on night patrol in the Somme. [1]

Charles Thomas Carr is buried in Cite Bonjean Military Cemetery, Armentieres, France I.E.5. There is an obituary to him in the Auckland Grammar School Chronicle for 1916. He is remembered in: He sailed on 21 January 1917 on the vessel ‘Ulimaroa’ to arrive at Plymouth, Devon, England on -27 March 1917 as a Sergeant with the 21st Reinforcements, Auckland Infantry Battalion, A Company, New Zealand Expeditionary Force He was stationed in France and whilst on patrol, on 27 September 1917, twisted his right ankle. He spent some time in Sling, England and then in France again on 8 February 1918 On return to New Zealand he was discharged from the Army, with the rank of 2nd Lieutenant on 19 October 1919. He received the British War Medal and the Victory Medal. Norman MacLeod Carr continued his studies gaining a Master of Arts degree in English and French from the University of Auckland in 1925. He died on 18 April 1981, aged 87 and is buried at Purewa Cemetery and crematorium, Meadowbank, Auckland, Block E Row 48 Plot 29. There is a memorial to him at the Mount Eden Methodist Church, 426 Dominion Road, Mount Eden Auckland. [3]