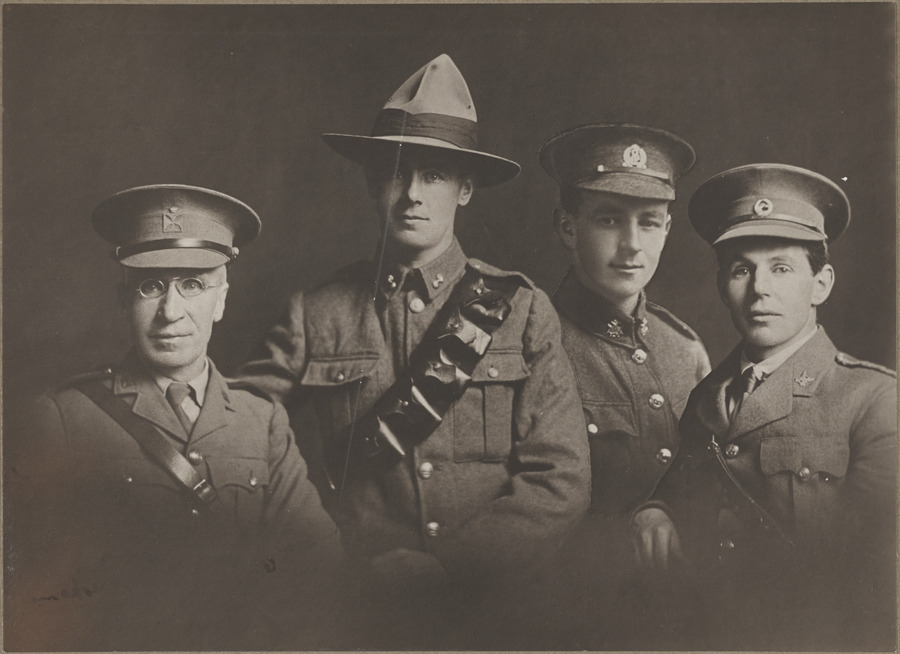 The Ready family, father and three sons, all served in the First World War. All four Ready men are remembered on the memorial at the Kaiapoi Methodist Church, near Christchurch, New Zealand.

Reverend Ready travelled throughout New Zealand as a Bible Christian Minister of the United Church, ending up in Auckland where they were living when William died suddenly in 1927 aged 66. Fannie died in October 1940 in Remuera. She is buried with her husband in the Purewa Cemetery.

During 1916 and 1917, Reverend William Ready served as a Captain-Chaplain Class IV, with the New Zealand Chaplains’ Department, New Zealand Expeditionary Force, on the hospital ship number 1, ‘Maheno’ for the 4th and 5th voyages.

There were two New Zealand hospital ships, the ‘Maheno’ and the ‘Marama’ both tasked with carrying injured men back to New Zealand. By the end of the First World War these distinctively marked ‘white ships’ had transported 47,000 patients. [4] Robert was born on 12 October 1894.  Robert was a member of the College Rifles, Rugby Union Football and Sports Club in Remuera.  When he enlisted, Robert was working as a bank clerk with the Bank of New Zealand.  He enlisted on 18 November 1915 in Invercargill and was sent to Trentham for training. [1]

From there he embarked on 4 March 1916-and arrived at Suez, Egypt on 8 April 1916 as a Sergeant with the 10thReinforcements, Otago Mounted Rifles, D Squadron, New Zealand Expeditionary Force. He transferred to the New Zealand Field Artillery as a Gunner on the Western Front in France near Messines.

On the night of 7 June 1917, the night the tunnellers exploded their bombs under the German trenches and tanks were used for the first time, Robert went missing whilst looking for a break in the communications line and could not be found.  Later, only his pocketbook was returned.

He was awarded the British war medal and victory medal

Wilfred Luxton Ready (8/1317), the middle of the three sons, worked as a Clerk in the Government’s Agricultural Department. He enlisted 14 December 1914 as a Private with the Otago Infantry Battalion, 2nd Reinforcements and fought in Gallipoli and the Western Front in France.

He was hospitalised in January 1917 with appendicitis and complications. After four months Wilfred was still not well enough, so was pronounced as ‘No longer physically fit for war service’. He returned from England to New Zealand on 8 September 1917 on the same hospital ship his father Captain Chaplain William Ready was on duty. Wilfred was officially discharged 18 October 1917. He died in 1976. [1, 2]

William Harold Ready (41997), the eldest of the brothers, was born 12 June 1890. William attended Auckland University College (now the University of Auckland) from 1909 – 1912 and began practicing as a self-employed Solicitor. For eight years, he was working in partnership with Alan Kenneth Duthie in Shortland Street, Auckland from 1923 until 1931. [1, 2, 3]

He enlisted 10 October 1916 and six months later in April 1917, was married in Wellington to Mabel Rebecca Iliffe Ready (nee Houghton). They lived at 220 Ponsonby Road, later at 48 Ladies Mile, and Lucerne Road, Remuera. They had one son: Harold Frederick Gordon (1918-1991).

William embarked for Liverpool, England on 22 November 1917, arriving on 7 January 1918. He was a Second Lieutenant with the Auckland Infantry Regiment and sent to France in January 1918. There, he was wounded in the right leg in April 1918 and returned to England to recuperate. He returned to New Zealand and was a member of the Territorial Forces until 1920.

He is remembered on the Pitt Street Methodist Church Roll of Honour, 78 Pitt Street, Auckland.